Thanksgiving is my favorite holiday. Of course, it’s a time for gratitude for good things such as one’s family, but I also love Thanksgiving because it allows me to escape densely packed Chicagoland with its 9 million+ people rushing to somewhere or nowhere, honking drivers, packed expressways, and light pollution, which makes it more likely that you’ll see Beyoncé or Jennifer Lawrence than Polaris, Sirius, or Rigel.

Every year on Thanksgiving, we travel to the rolling hills of southern Wisconsin about 10 miles from Lake Geneva. My wife’s uncle (I feel like he’s my uncle, too) treats 35 of us to the holiday meal at the Big Foot Country Club (thank you, again, Fred). Then we head to his farm house that’s surrounded by cornfields and forest. 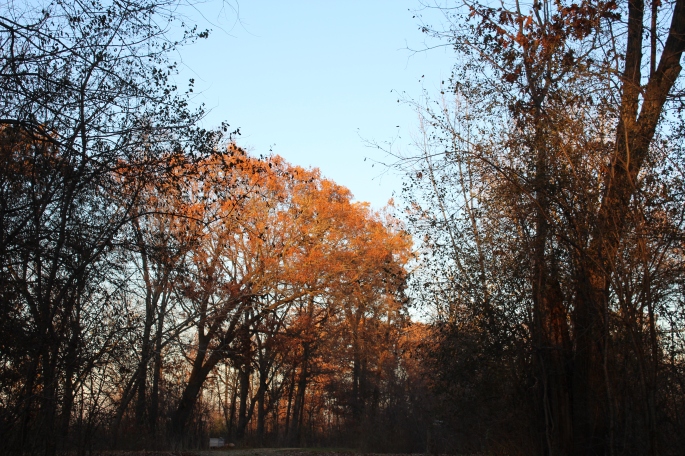 Fred’s farm is special to me. I’ve lived in Chicago for my entire life. I love Chicago occasionally, and like it 24 percent of 31 percent of the rest of the time. But, nearing age 50, I’ve decided that I’m most happy with fewer people packed in around me than there are in Chicago, fewer roads and sidewalks, fewer what not. I’ve decided I want more nature, peace, and solitude. At my nonagenarian uncle’s piece of paradise, his nearest neighbor is probably half a mile away, you can see all the way to the horizon (the sunsets are amazing), and the only sounds you hear are the wind blowing through the trees and the wildlife. One year, I heard the yips and howls of a pack of coyotes echoing through the woods and fallow farm fields. It was awe-inspiring.

A short walk from his house, you’ll find horse stables, massive farm equipment that could play a bit part in a Terminator movie, and a pond with a lonely-looking rowboat turned on its side. This year, the kids loved trying to break the ice on the pond with rocks and collecting pheasant feathers near the shoreline. I was the official pheasant feather holder as the kids pried up rocks from the muddy shoreline. For some crazy reason, I let my son walk to the pond in his suit and dress shoes (we pick our battles as parents)…at least I’ll be supporting our local dry cleaners. The shoes: a haz-mud situation. We’ll be calling in the priest for last shoe rites. 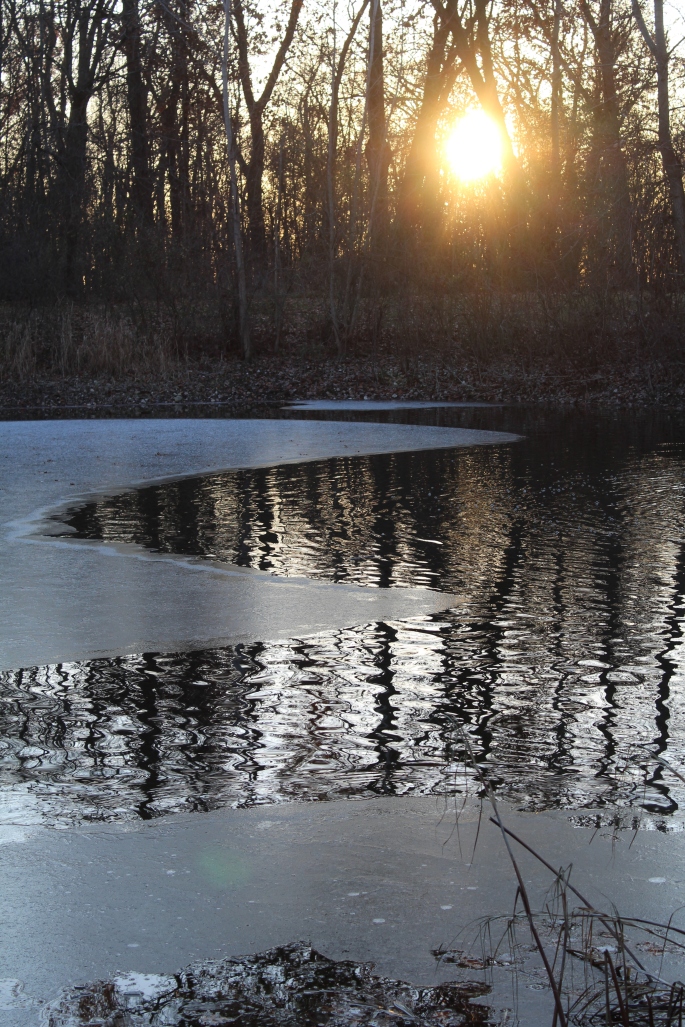 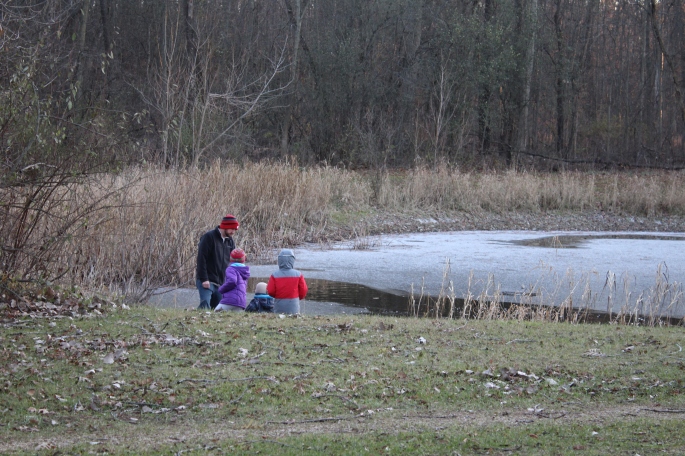 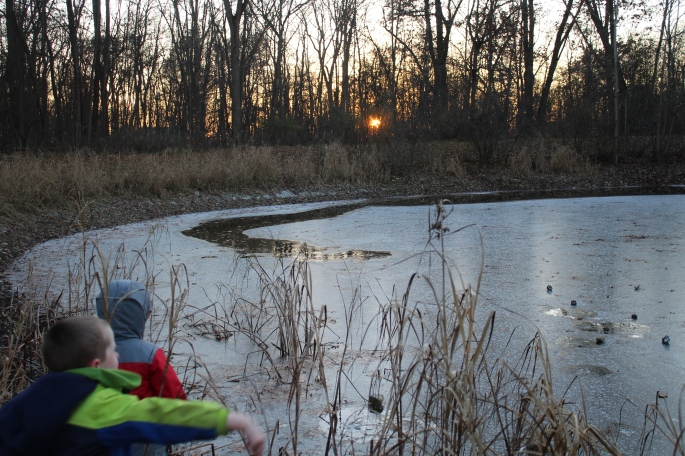 It’s also fun to hike through the woods or through the fields of recently harvested corn. Flocks of geese often take flight from the fields or simply pass over us as we hike. You can hear their noisy honks long after they’re out of sight. 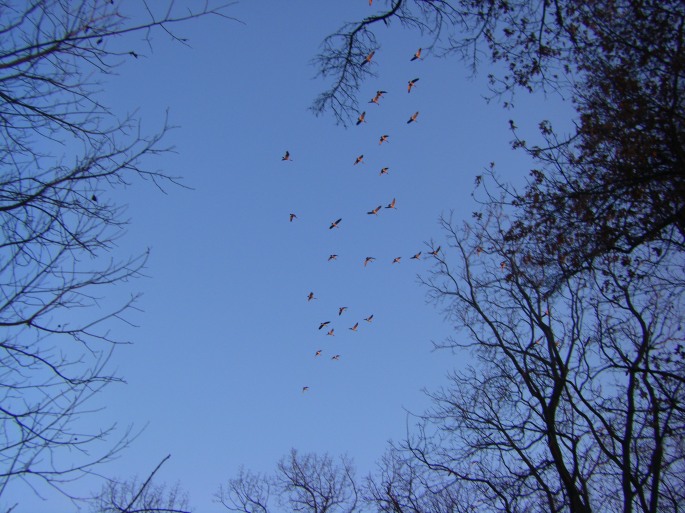 Occasionally, it snows early at the farm, and the kids (and some of us kid-like adults) go wild—sledding, having snowball fights, and making snow angels.

And, unlike Chicago—with its streetlights, brightly lit entertainment districts, and skyscrapers—it gets very dark at my uncle’s farm once the sun sets. It’s a powerful and humbling feeling to be out in the country once the sun drops beneath the horizon. It is so dark away from the farmhouse that you can barely see where you’re going. You feel both exhilarated to be out of your element as a city person, and a bit disconcerted because there are no walls between you and wildlife, a wrong turn could send you deeper into the woods, and the sheer cold (some years) activates something primeval that tells you to get inside, warm and safe. And, unlike the Chicago skies, you look up and are gifted with one of the great wonders of life—a sea of stars in the sky, along with a few planets and the moon. And, if you’re lucky, you may glimpse the occasional meteor zipping across the sky like an errant toddler exerting his first burst of speed.

Many of us enjoy being outside and, at some point, one of us builds an earnest little fire at the edge of the forest as the last sun dips between the horizon. Kindling is broken and placed into a tepee-style fire structure, smaller pieces of wood are added atop the kindling, the fire is lit, and a small bit of the darkness is reclaimed by those of us who brave the elements to stand around it to warm ourselves, talk, drink beer, and breathe the fresh air.

The fire becomes a touchstone and a place of safety in the blackness—the sparks from shifting logs occasionally floating up like wishes to the heavens. Family members come and go, and we catch up on our lives, laugh, and enjoy each other’s company. Sometimes we grow quiet, simply watching the fire and listening to the occasional sizzle and crackle of wood sap burned off by the flames.

My time at the farm is always special, and I’m glad to be part of Amy’s family and away from Chicago, where nearly every bit of ground is covered by concrete, most people are strangers, a fire would usually bring out the fire department, and only a few of the brightest stars can be seen in the night sky.

Gradually, various cousins and other family members head home. It’s getting late and this now roaring, almost living, fire must be put out. Since I started the fire, it’s my job to douse it. My seven-year-old son offers to help, so we fetch buckets of water from the house. My wife has already started the car; we are some of the last people to leave.

The fire sizzles angrily as we dump water on it. A plume of gray ash floats away from the fire into the woods—a forest ghost in the darkness. Tendrils of flame fight past the water and flicker. We make a few more water trips, and finally the fire is out. It feels 15 degrees cooler. Darkness rushes into the space where the fire once blazed. I pull out my cell phone to help light our path, but it doesn’t help much.

My wife beckons us to the car, but I pull my son and her a few hundred feet from the dull glow of the lights from the house. We hold hands in the near darkness, and look up at the vast wash of stars above us. We pick out constellations and marvel at this sight of so many stars in the sky. There are so many stars that it’s almost like they’re battling the darkness for control of the sky.

“I don’t either,” I answer as we linger for a few minutes in the darkness and cold, mesmerized by the sky. “When you’re an adult, I hope that you live in a place where you can see the stars like this every night.”

But life in Chicago beckons. We get into the car and head up the long unpaved road away from Fred’s farm, eventually hitting pavement. It’s dark on the winding country roads, so we still glimpse many stars through the windows. We eventually pass through small towns lined with stores and streetlights. The lightening sky gradually blocks out more stars, and then we hit the interstate to head home (and our journey turns from special to mundane). When we get home, only a few of the brightest stars are visible. I miss the farm already. Until next year.

Copyright Andrew Morkes (text/photos, except the wonderful last photo just above from NASA)

7 thoughts on “Thanksgiving Day: On Escaping Chicago, Spending Time with Family, and Enjoying a Fire and the Stars”