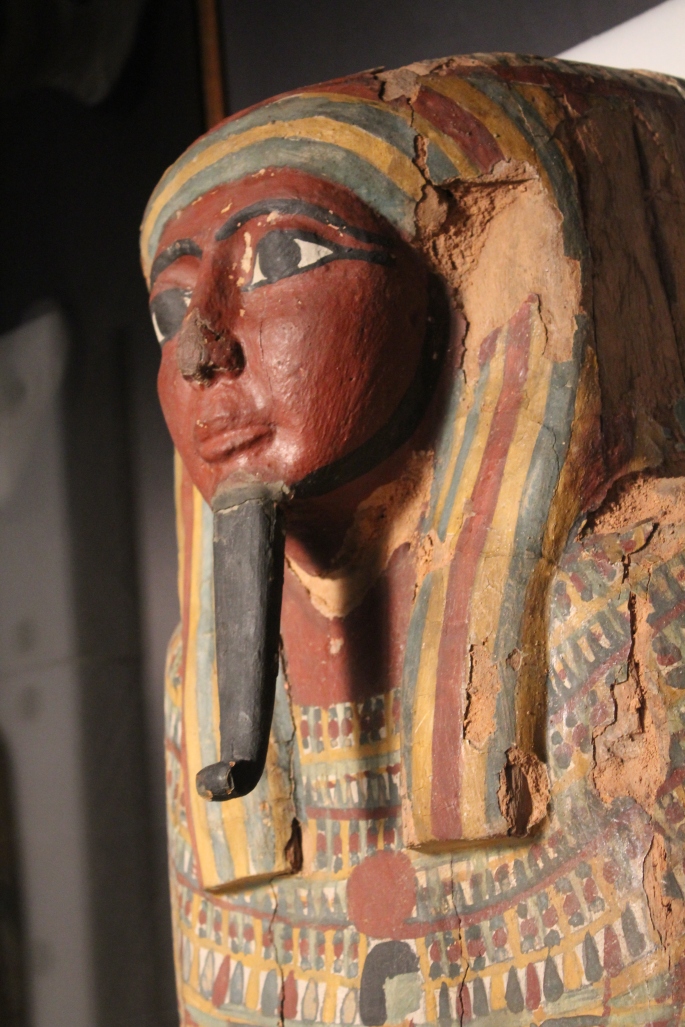 Chicago is known for its stunning architecture, talented writers, cutting-edge food scene, winning sports teams, and its world-class museums. But if you’ve lived in Chicago your entire life, it’s easy to take our museums for granted. Many people visit these vast repositories of ideas, science, art, history, and nature when they are kids, and never make it back—thinking they’ve seen it all. In fact, museums are almost like living beings, changing constantly based on new discoveries, new viewpoints, and changing perceptions of art, history, science, and the environment. Yet, despite new or reimagined exhibits, museums serve as thought-provoking, fact-based oases in our truth-challenged times. They’re also a lot of fun.

The Field Museum (1400 South Lake Shore Drive, Chicago, IL 60605-2496, 312/922-9410) is no different, and I’m glad my wife, son, and myself were able to visit this Chicago icon last Friday. The new exhibits, generous use of interactive technology, and the reimagining of some old exhibits quickly demonstrated that this was not the museum of my youth. You could spend several days in the museum and probably not see everything on offer. Unfortunately, we only had one day. Here are a few highlights to check out during your next visit. (Note: These exhibits require the purchase of an All-Access Pass; more on museum admission pricing later.) 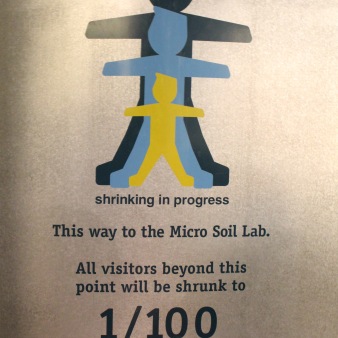 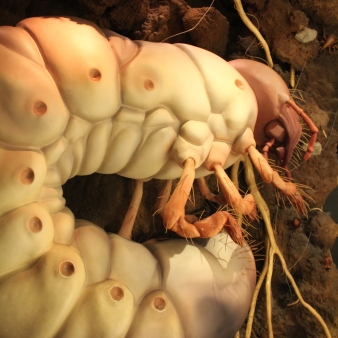 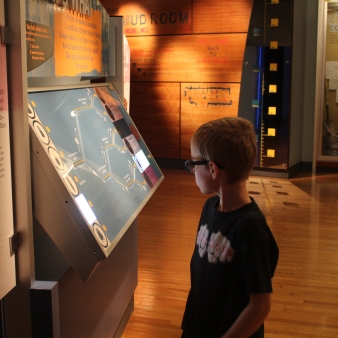 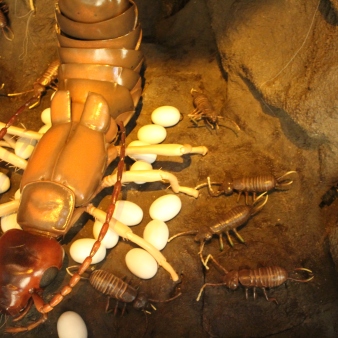 Underground Adventure: As you enter this exhibit, you will magically “shrink” to 1/100th of your actual size (at least in your imagination) to explore the world of worm tunnels; learn more about the important role soil plays in plant growth and in the health of ecosystems; interact with a wide range of creepy crawlies such as a giant mole cricket, wolf spider, earwig (watch out for its snapping tail), and other animatronic critters; and learn about the underground world via videos and hands-on exhibits. Underground Adventure was my eight-year-old son’s favorite exhibit, and your kids will probably have a lot of fun there, too. Open through December 31, 2020. 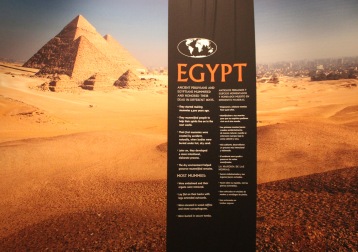 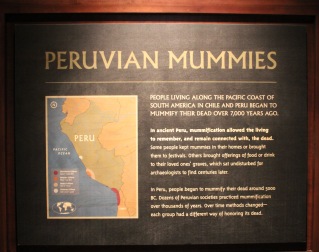 Mummies: This new exhibit features 14 Egyptian and Peruvian mummies, colorful and ornate detailed coffins, mummy masks, mummified animals (Egyptians believed that the gods could appear in any form, including animals), and much more. Museum curators used non-invasive CT scanning, DNA analysis, and other technologies to peer past the wrappings to learn many fascinating things about the contents of the mummies without destroying the mummy. Excellent hands-on and interactive exploration tools and short movies make this an interesting exhibit for people of all ages. Open through April 21, 2019. 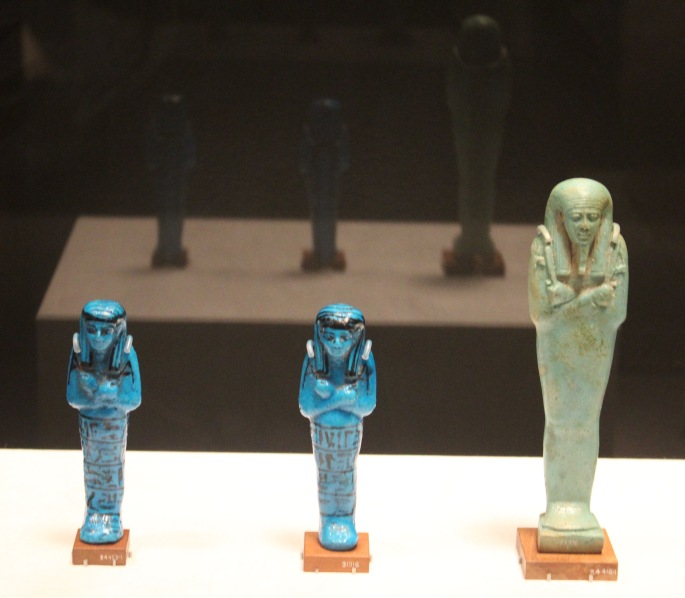 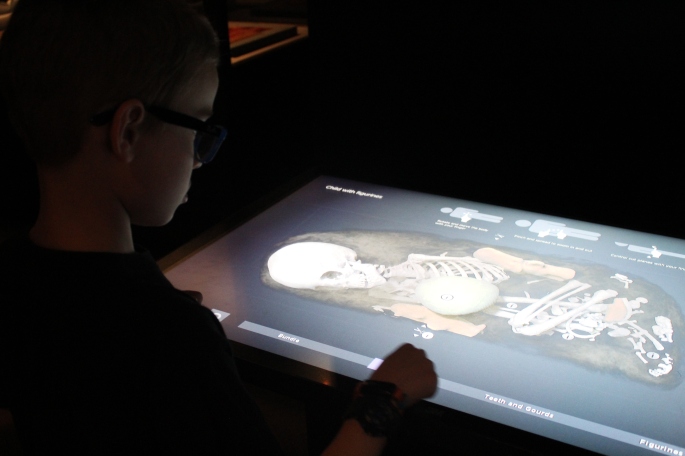 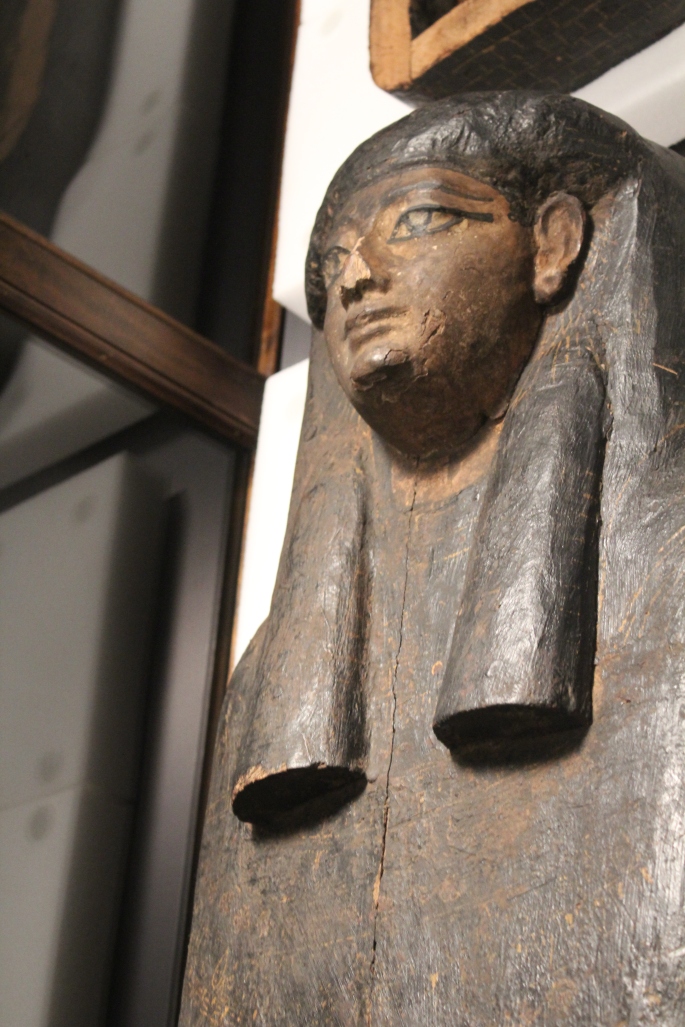 Ancient Mediterranean Cultures in Contact: Some people believe that culture is static, but the truth is that, throughout history, cultures constantly have interacted, with both positive and negative effects. Ancient Mediterranean Cultures in Contact examines the interaction between the Roman, Egyptian, Greek, and Etruscan cultures in the 500 years before and after Christ. More than 100 objects from The Field’s collections, videos, and hands-on exhibits tell the stories of these cultures and their influence on one another. The objects in the exhibit are both beautiful and thought-provoking. I especially enjoyed learning how Greek and Roman culture influenced that of ancient Egypt. For example, Greek and Roman leaders were crowned as pharaohs, burial practices changed (realistic paintings of the faces of the dead replaced traditional Egyptian funeral masks), and Greek and Roman approaches to art, philosophy, religion, and other areas of everyday life were adapted and reimagined by the Egyptians. The exhibit ends with a child’s life jacket, a red plastic gasoline vessel, and an iPhone case, which were used by modern-day migrants undertaking the dangerous trip across the Mediterranean Sea. These objects were found on a Greek island beach in recent years—reinforcing the fact that the interplay of cultures continues to this day. You’ll need to act fast to view this exhibit, it closes on Sunday, April 29, 2018. 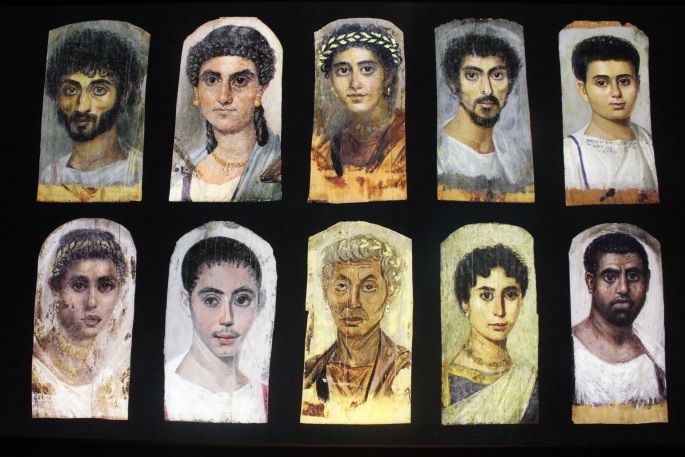 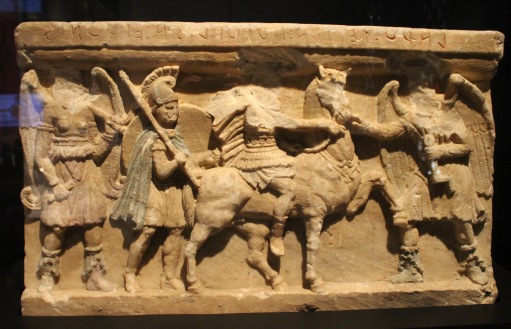 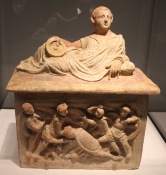 Other must-sees (these exhibits are free with general admission) include:

Inside Ancient Egypt: Tour a three-story ancient Egyptian tomb, including two authentic rooms from the 5,000-year-old tomb of Unis-Ankh, son of the 5thDynasty Egyptian Pharaoh Unis. 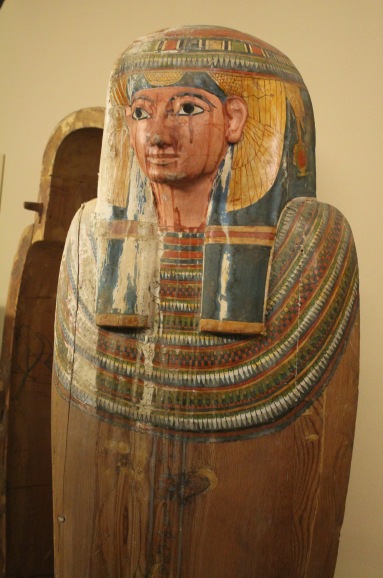 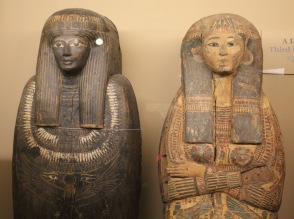 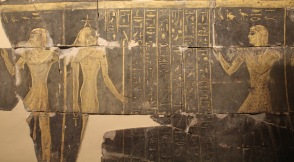 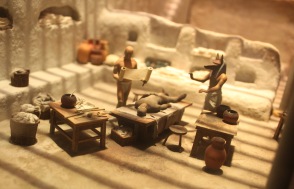 Evolving Planet: Learn more about the development of life on Earth—from the emergence of single-celled organisms, to massive dinosaurs, to humans. You’ll see awe-inspiring fossils, ferocious-looking dinosaur skeletons, and much more. 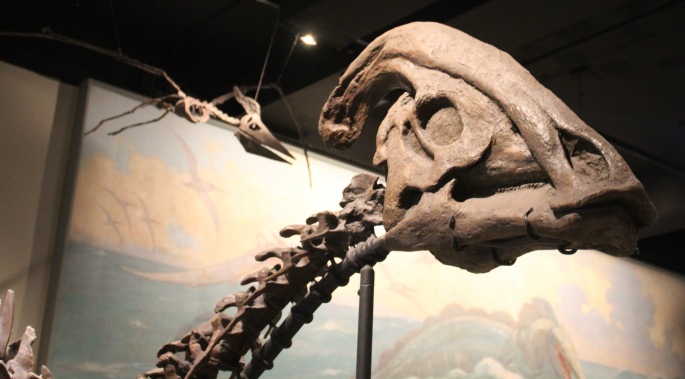 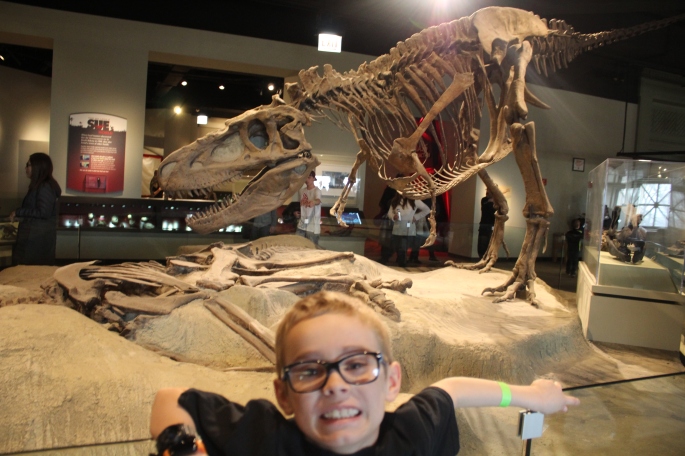 Meteorites: I never realized how many different types of meteorites there are. The kids will enjoy the chance to view and touch some massive meteorites.

Pawnee Earth Lodge: Tour a full-size replica of a Native American home that was a common sight on the plains of Nebraska in the 1800s. Visitors can sit on buffalo-robed beds; view and touch replicas of beadwork, pottery, and other goods; and learn more about Pawnee culture from museum docents. 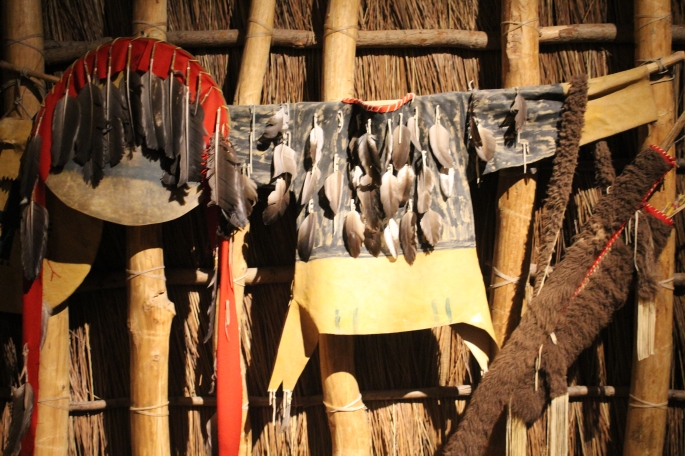 MOLD-A-RAMA: It’s not an exhibit—and it cost $3—but I enjoyed taking a walk down memory lane with my son as we watched a plastic elephant being made. The MOLD-A-RAMA machines were old when I was a kid, and it was fun passing on a memorable, if not hokey, childhood experience to my son. 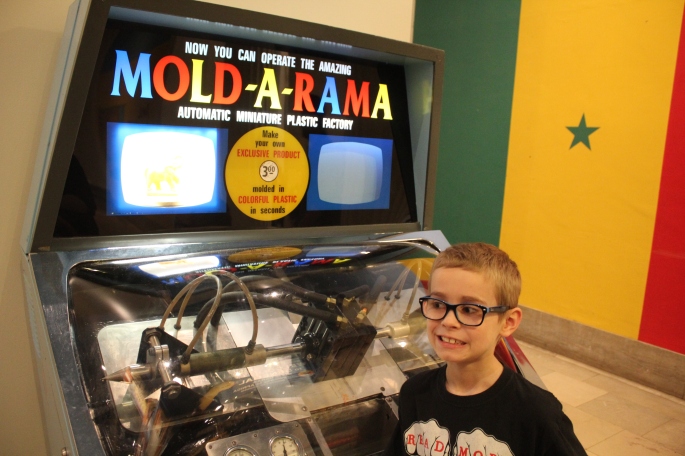 If you’re wondering why I haven’t mentioned SUE, the most famous dinosaur in the world, you’ll be happy to learn that she’ll be back after a short vacation. SUE was carefully dismantled and removed from the museum’s Stanley Field Hall, and a new special exhibit area is being built for her. In her place, the museum will introduce a cast of the largest dinosaur ever discovered, a 122-foot-long titanosaur. This massive dinosaur will be joined by a life-like flock of pterosaurs (which had wingspans of up to 35 feet) and hanging gardens that will feature plants that were alive at the time of the dinosaurs. I look forward to seeing these new additions to the museum.

My one quibble with The Field Museum is the high cost of admission—especially if you purchase the All-Access Pass, which allows visitors to see every exhibit and one 3-D movie. If we had not snagged the Chicago Public Library’s museum pass, we would have paid an admission price of $103 for two adults and one child. A family of five—two parents and three kids—would pay $157 for the All-Access Pass. Admission prices are somewhat more affordable for Basic Admission (our family would have paid $61 without the library pass). I understand that museum admission costs are high around the city, but more efforts need to be made to introduce people to science and other subjects to fight the growing trend toward anti-intellectualism in the United States. To offset the high admission fees, The Field Museum offers a few free days (April 14 and J​​une 20–22, 2018) for Illinois residents and membership pricing (which would be most useful for frequent museum visitors). And as part of the Museums for All Initiative, it offers significantly discounted admission to families that qualify for state food assistance. But middle-class families and those that do not qualify for state food assistance do not receive these discounts. These families could get some financial relief if the museum offered ala carte pricing for some of the exhibits that require the purchase of an All-Access Pass. As it is now, visitors pay a set admission fee regardless of whether they want to see every special exhibit or not. Also, museum hours could be extended (from 9:00-5:00 to perhaps 8:00-6:00, or extended evening hours could be offered on select days) to allow museum visitors to get more bang for their buck. Parking fees ($20 to $25 depending on length of stay) were also high, but that’s a citywide complaint.

Regardless of my concerns about pricing, I highly recommend visiting The Field Museum. Here are a few things to keep in mind as you plan your visit:

3 thoughts on “The Field Museum: Dinosaurs, Mummies, a Bug’s-Eye View of the World, and Much More”