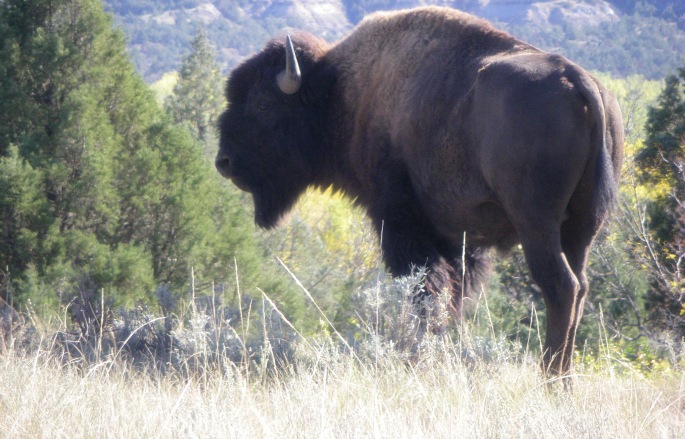 Bison are an enduring symbol of the old American West—and our national mammal. Massive, powerful, and free, they linger in the American imagination unlike any other land animal except perhaps the bald eagle and grizzly bear. At their peak in the mid-1800s, an estimated 30 to 60 million bison ranged from Canada to northern Mexico and from the Plains to Eastern forests. The diaries of early settlers recorded herds of bison so vast that they took hours to pass. But the completion of the Transcontinental Railroad in 1869, the indiscriminate killing of bison by white hunting parties (they often only took the animal’s tongue and hide, leaving the carcass to rot on the prairie), and a concerted effort by the U.S. military to deprive Native American tribes of one of their principal food sources during the Indian Wars decimated these vast herds. The tens of millions of bison were reduced to massive piles of bones and hides, and by about 1890, only 1,000 or so bison remained, including two dozen in Yellowstone National Park. 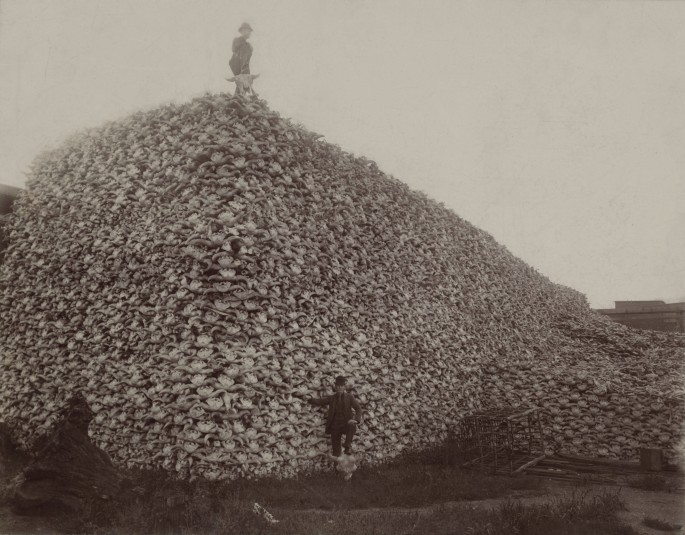 All seemed lost for the bison, but ranchers such as James “Scotty” Philip, the U.S. government, and others stepped in to save the last remaining bison. Today, there are approximately 150,000 bison in the United States, with nearly all found in the West—especially in Yellowstone National Park (Wyoming, Montana, and Idaho), Custer State Park and Wind Cave National Park (South Dakota), Theodore Roosevelt National Park (North Dakota), and Santa Catalina Island (California). 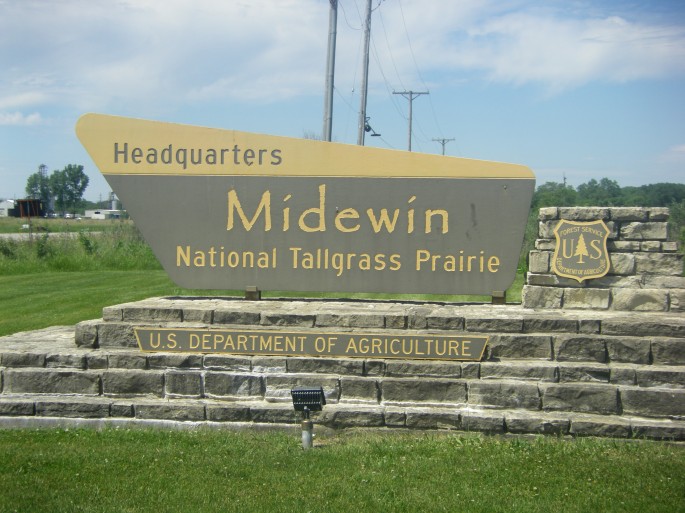 Those who live in the West have plenty of opportunities to see bison, but did you know that there are nearly 10 places you can go to view bison in the wild in the Midwest? A few days ago, I visited one of these destinations: Midewin National Tallgrass Prairie (815-423-6370), which is about 60 miles from city-center Chicago in Wilmington, Illinois. It is managed by the USDA Forest Service. Approximately 13,000 acres, including 34 miles of trails, are open to the public for hiking, bicycling, and horseback riding.  Midewin, which was established in 1996, is the first national tallgrass prairie in the country. Nearly 150 bird species have been sighted at the prairie, and 18 endangered or threatened species, 23 species of reptiles, 40 aquatic species, and 27 species of mammals make Midewin their home.

My son and I, as well as Greg, a good friend of mine, and his children, started out from the northwest side of Chicago with high hopes to see bison—which last roamed wild in Illinois in 1808. (This was just a few years after Lewis & Clark returned from their epic exploration of the American West.) But when we arrived at Midewin, our first thoughts were on our growling stomachs, so we headed to Midewin’s visitor center to have a picnic lunch. The small, but interesting, facility offers exhibits that detail the site from its Native American era, to the time of white settlers, to its use as the Joliet Army Ammunition Plant, and now as a grassland (and larger ecosystem) in the process of restoration. The kids will enjoy the bison hide they can touch and the small exhibits on bison bones and fossils. A bookstore, a pleasant outdoor picnic area, and guided tours and presentations on certain days of the year round out the offerings at the visitor center. 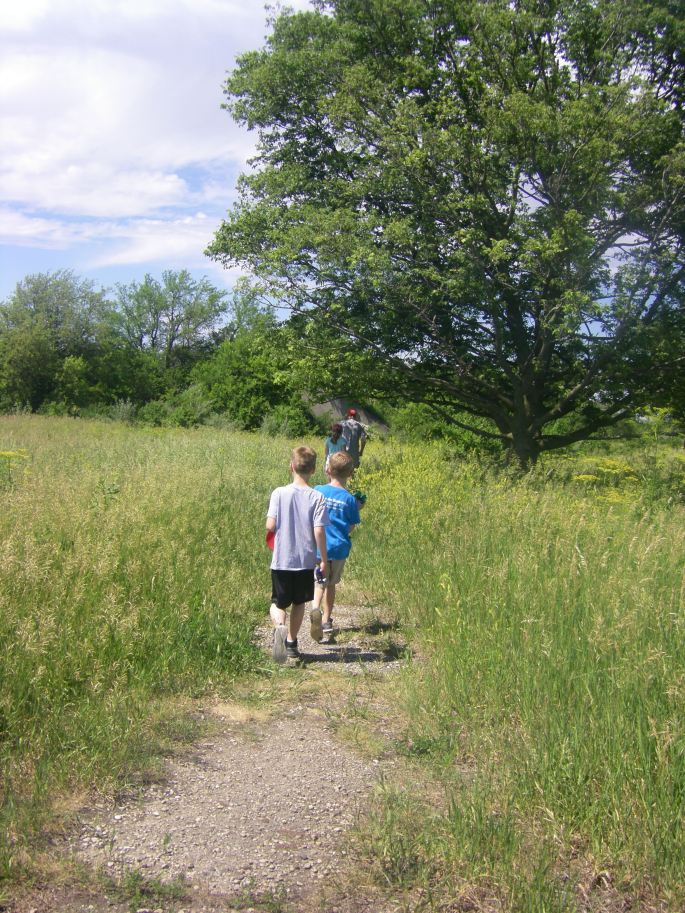 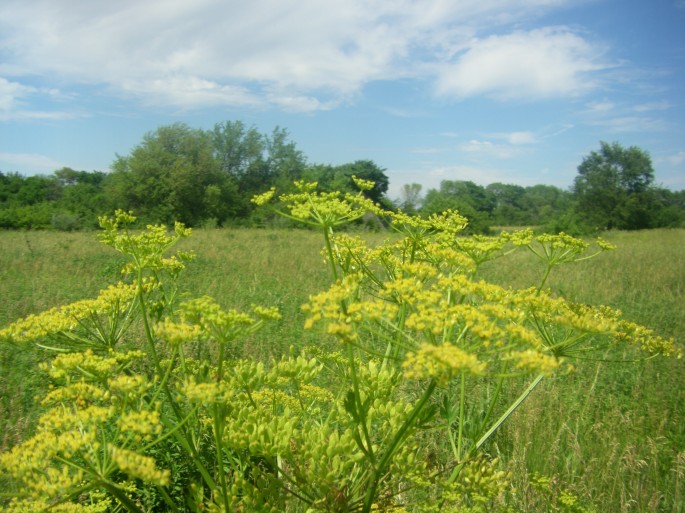 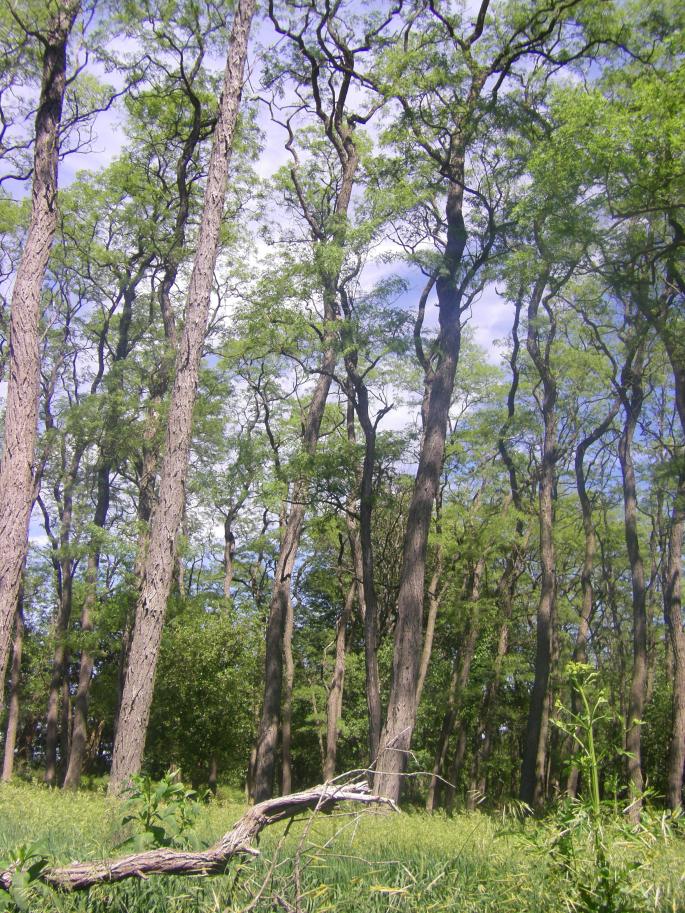 After lunch, we headed to the Iron Bridge Trailhead, then began hiking in the hot sun. We walked amongst Golden Alexanders, Prairie Indian Plantains, Porcupine Grass, Tufted Hair Grass, and other wildflowers and grasses beneath vivid blue skies. The songs of birds and crickets were like a natural symphony as we traversed long stretches of prairie intermingled with savanna, wetlands, and the occasional breaks of forest. As we hiked, it was hard to believe that this area housed a massive ammunition facility during World War II. The USDA Forest Service’s ecological restoration efforts are impressive.

We eagerly scanned the horizon for bison, asked other hikers if they had sighted our quarry, and climbed a bench or two to get a better view of the long flat prairie (my preternaturally-tall friend came in handy for this task)—but to no avail. We didn’t see any bison, but we did see the remnants of two military armaments storage bunkers, which the kids enjoyed investigating. 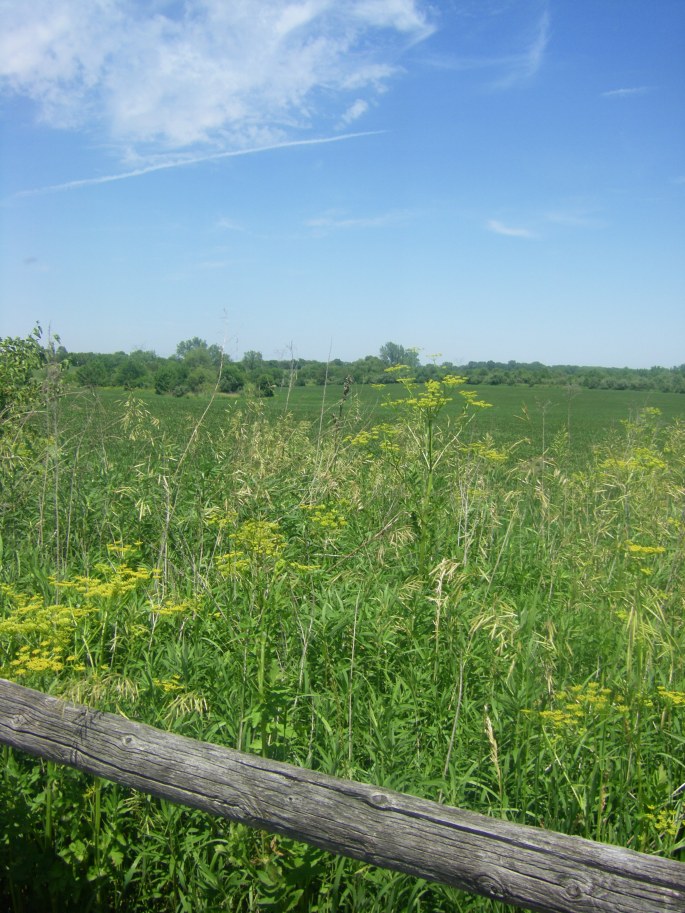 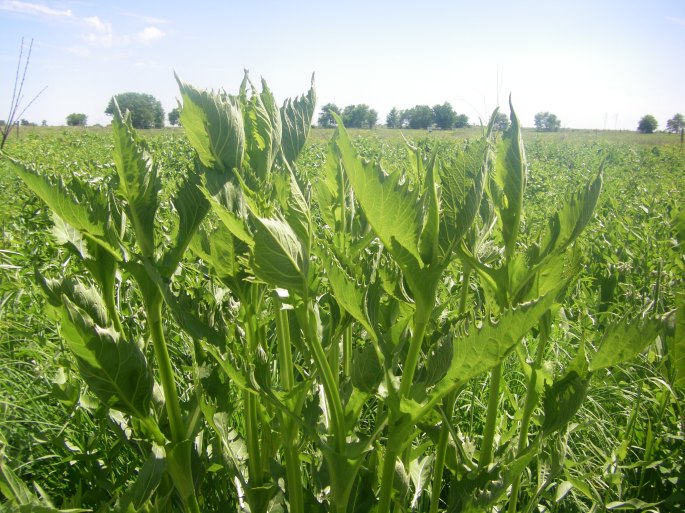 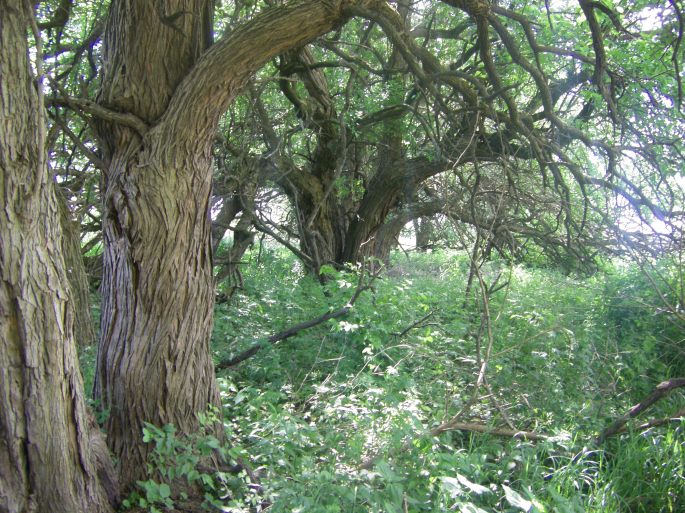 A male bison can weigh as much as 2,000 pounds and reach 5’6” at the shoulder, but despite their massive size, the 27 bison at Midewin were missing in action (forgive the bad military pun) amidst the 13,000-acre prairie. They are highly mobile animals that can run 30 to 45 miles per hour, and they are often on the move in a search for food. We searched and searched with no luck.

The day grew hotter and our kids’ patience grew shorter, so we headed back to the car, disappointed, but not defeated. Midewin is a work in progress (for one, it can use some additional signage regarding its natural features, the bison, and trail mile markers), and so is our search for the bison. With nature, sometimes you must play the long game and wait to be rewarded. What’s comforting is that the USDA Forest Service and dedicated volunteers are slowly creating an environmental jewel in the Chicago suburbs. Midewin is an excellent destination for hiking and nature watching and, someday soon, we’ll head back to see the bison.

A Few Tips for Visitors:

7 Other Spots in the Midwest to See Bison:

Copyright Andrew Morkes, 2017 (text/photos, except the photo of the piles of buffalo bones, which is courtesy of Wikipedia Commons)

Visit my website to check out sample chapters, introductions, tables of contents, and sample copies (newsletters), as well as to order my publications.

21 thoughts on “7 Places to See Bison in the Midwest”